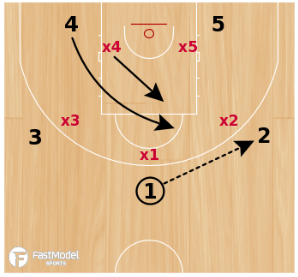 This play to run against a 3-2 zone defense zone defense was contributed by Andreas Barthel to the FastModel Sports Basketball Plays and Drills Library.

Coach Barthel looks back on ten years of success on multiple levels. He has worked at the pro level in Germany and Austria. In addition, at the Bay Area varsity level.

His reputation is based on a strong analytical approach and profound analysis of all aspects of the game. A disciplined work ethic and goal driven attitude identifies him. He lives the way of a solution-oriented leadership style that instills a positive poise through the heart and mind.

During his career Barthel coached numerous professional players. Further he has worked with German and Austrian national team players, both youth and men. You can follow Coach Barthel on Twitter at @AndreasBarthel.

This is what Coach Barthel said about the play:

Very effective in attacking a 3-2 zone.

This play creates an open 3 point look in the corner and multiple options to score with.

This forces X4 to shift 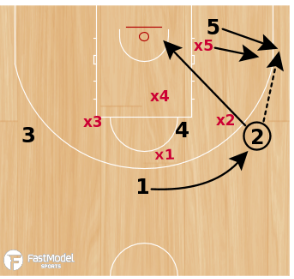 2 passes to 5 and cuts to the basket

1 fills the ball side wing 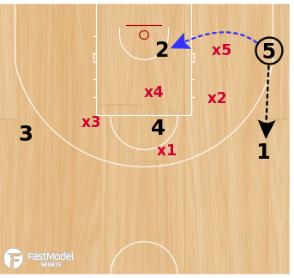 IF X5 closes out on 5, then 2 will be open on the cut to the basket 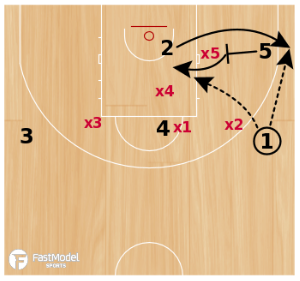 2 cuts to the ball side corner

Either 2 will be open for a shot, or 5 after the screen and slip to the basket 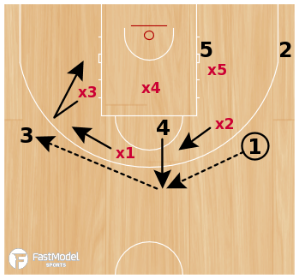 If 1 can’t pass the ball to either 5 or 2, then he passes the basketball to 4

X3 is forced to step out and recover

X1 and X2 are forced to shift 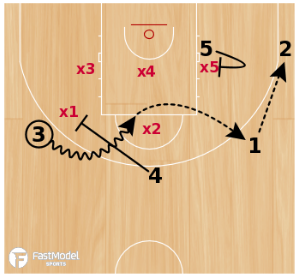 4 screens on X1’s inside shoulder

1 passes to 2 who still remains in the corner