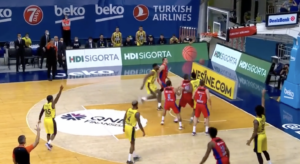 Basketball is a global game. Coaches who follow international basketball were not that surprised that the USA Basketball team lost to Nigeria and Australia. The style of play of Euroleague teams is becoming more prevalent in USA basketball.

Coach Kalferopoulos studied last season’s Euroleague teams and pulled out his favorite actions that he believes could help teams win and created this:

Transition offense is a great time to attack. The defense is sprinting back and may not be in position to defend the basket. Fenerbahce runs a couple wrinkles out of Double Drag.

This wrinkle of Double Drag is designed to allow 2 open looks for shooters.

In the half-court, Horns is one of the most predominant alignments in basketball in USA basketball at every level. Alba Berlin’s spacing and timing of their Horns actions is a beauty to watch.

In a coaches playbook you want to make sure you have designed sets in certain situations. Most coaches have designed sets for: need a 2, need a 3, after timeout, SLOB & BLOB. Practicing ATO’s before you draw them up in the huddle will help make it easier.

The SLOB that Armani Milano runs is designed to get a quick 2 because they’re down by 1 with just over a second to go. Under one second, you want to make sure you have a play designed that will get you a quick open look or a tip in/lob at the basket.

This playbook is filled with more than 100 set plays run by Euroleague teams during the 2020-21 season. All clips from game film video.

If you enjoyed this playbook and want more Euroleague action click below: