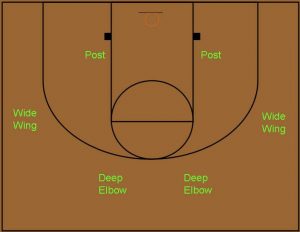 I believe that the defensive and offensive systems and styles that a basketball team employs must be complimentary.

In this post, I am going to concentrate on what I call the 6 phases of an offensive possession.

My hope is that you can get a couple of ideas to adapt to your program.

Offensive Phase #1 Transition after made baskets and missed baskets. Never be surprised by a trap or full court press–we inbound the ball in our press offense every time after our opponent scores. Our principles in our press offense are to put one player back as a finisher at the basket. Throw the ball over the top of the press as a pressure release. One reversal and then cut through. Do not throw the ball back to the side from where it came. 3 x15 foot receivers in the backcourt. Pass fakes to move the defense.(10 sec better than bad pass). Man to man clear out for primary ballhandler, but be prepared for a run and jump. Click here for more on press offense.

All eyes on the ball as it crosses half court. If we do get trapped, we automatically go into rotation–our half court trap alignment.

Our perimeter spots are one step behind the 3 point arc.Wide wings, deep elbows, deep corners are suggested spacing spots. Only throw to a player in the deep corner who has an immediate shot to avoid putting the ball in a trap situation. Too high and too wide is better than too close for deep elbow and wide wing.

be someone at the ballside wide wing to give the ballhandler an outlet if s/he is trapped.

At all times we have 4 players without the ball, screening, cutting, spacing, slipping, or posting

Catch triple threat–eyes on the net. Make the easy pass. The best Use Pass Fakes. Use bounce passes to throw out of traps or trouble. Don’t pass to the offense-pass away from the defense which usually means the outside hand. Meet every pass. Attacking too fast or forcing drives or passes that are not available Catching and dribbling rather than catching in triple threat leads to turnovers.

Passing-push with outside hand to outside hand of receiver. Contact is never an excuse to loose the ball Fake a pass to make a pass.

Do not fake backdoor. If you start a cut backdoor, you go all the way to the basket.

Do not settle for outside shots against a zone or a trap—go inside.

Dribble drives, Post feeds, passes to cutters, and offensive rebounds are the ways that we get the ball in the lane.

Offensive Goals: 2/3 possessions ball in lane. We chart this in practice and games.

Offensive Phase #5 Shot selection—Don’t settle for anything less than who, what, when, and where we want 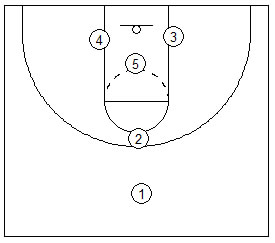 if #1 or #2 Shoot the ball, they do not follow their shot in our system. #2 (We call him our halfback) slows the ball as it is beirng advanced on the dribble. #1 (we call him our fullback) retreats to cover the basket.