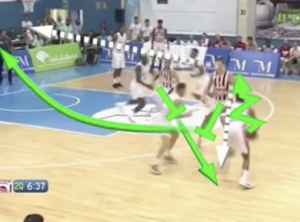 The Spain Pick and Roll is a new variation of the Pick & Roll that has taken the NBA (and other basketball levels) by storm this year.

The Spain pick and roll occurs when a screen is set for the ball handler, then a third player sets a screen on the player defending the man rolling to the rim.

A normal pick and roll is used to create a two-on-one advantage — adding a third player essentially turns it into a three-on-two.

The Spain pick and roll is being used in many different wrinkles & series because it is very hard to defend.

The back screen is one of the hardest screens to guard in the game of basketball — it causes most teams to just switch even if it creates a mismatch.

All 5 players are involved in this set — which causes the defense to stay on their heels defending multiple actions.

The Spain pick and roll creates a defensive nightmare.

In a regular pick and roll, the defense only guards the ball handler and the screener while the other defenders are in help position.

The Spain pick and roll adds another offensive player in the equation and adds one of the hardest screens to defend.

The complete course is available here

If you’re interested in seeing more from Coach Luka Bassin then you can find more courses below:

The Most Popular Xs & Os in European Basketball

Box +1 – Winning Defense for ALL Levels