This is a good ball screen mis-direction set sent to me by Syracuse Women’s Associate Head Coach Vonn Read. 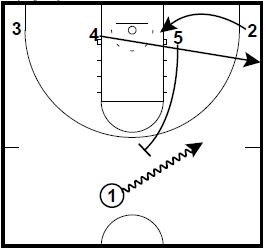 The 5 player will sprint up and set a ball screen for the 1 player.

The 4 player will relocate to the short wing area, and the 2 player will cut to the block. 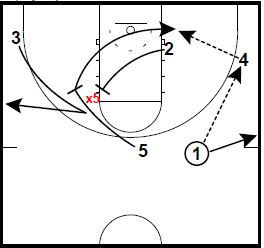 After setting the ball screen, the 5 player will loop out and set a fake single pindown screen for the 3 player (shooter) who will use the screen and then cut to the wing.

This screen will usually force a show (help) by X5 when the shooter comes off the screen.

This sets up the razor screen set by the 2 player.

The 1 player will pass to the 4 player, and the 2 player will set the screen for the 5 player slashing to the rim for the layup or block post up. 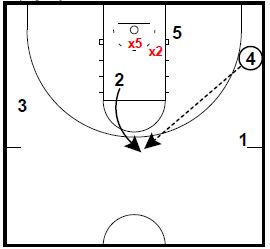 If the 5 player is not open, look to pass it to the 2 player at the top of the key.

Their defender (X2) will usually help on the screen, leaving the 2 player open for the jump shot.