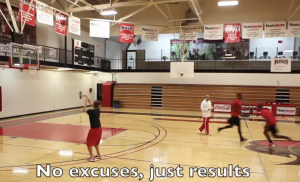 The following offensive rebounding drill is provided by Coach Jamy Bechler. Coach Bechler has coached several teams that have achieved several national rankings for rebounding. During the 2013-’14 season, they led the nation in Rebounding Margin (+19), Rebounds per Game (55 rpg) and Offensive Rebounding Average (21/game).

They were among the NAIA’s Top-10 in each of these categories in all of Coach Bechler’s years at Martin Methodist College. While at Bryan College, Bechler’s teams were known for their toughness and rebounding. In his three years, the Lady Lions finished in the NAIA’s Top-10 for Rebounding Margin culminating in an incredible +18 rpg average during the 2009-2010 season.

The statistics show that more field goals are missed than made, so the philosophy he instills is that “every missed shot is a pass to me.”

The drill below is a sample from his Championship Rebounding Video.

You can find out more about the video at this link: Championship Rebounding

This is a vimeo video, so make sure that you are able to access that network. Also, please make sure your sound is on for the instruction with the video.