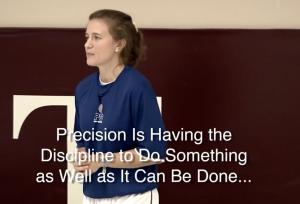 —Excerpted from the book, “Stuff Good Players Should Know” by Dick DeVenzio

Posted with permission from PGCBasketball

Common sense might seem to tell you that great plays are what make the difference between a good player and a mediocre player. But most coaches would disagree. More often, they would say, great plays—or the attempts to make great plays—are what make good players mediocre. Since this seems to defy common sense, a few definitions might be useful.

WHAT IS IT THAT SEPARATES A MEDIOCRE PLAYER FROM A GOOD PLAYER?

Both are in many ways the same. Both could have about the same speed and quickness, the same strength, the same height and weight, about the same shooting and dribbling ability. Often, the only difference comes with regard to great plays.

Many players are mediocre because they try to make great plays. They want to score a fancy layup, and they miss it. Or they try to throw a lightning-quick pass to a cutter six inches ahead of his man, and it goes out of bounds. They try to hit a fade-away jumper, and it goes off the rim. Or they go for the game-winning steal, but they miss it and the other team puts the game out of reach.

Mediocre is sometimes just another name for at erratic or inconsistent or “always striving to make great plays.”

It may surprise you to learn that good players don’t strive for great plays. Great plays come to them occasionally, but only when they are in the process of concentrating on their job, trying to do all the little things right.

Take Michael Jordan for example. He made a lot of great plays, but his value, even more important to his team than all those spectacular dunks, was that he didn’t miss many dunks. He was consistent. On the plays where a spectacular dunk had a good chance of missing, Jordan “happened” not to try it at all. “Ah,” said the fans, “he should’ve dunked that one.” But he didn’t dunk every chance he got. He dunked the ones he could dunk, and he didn’t attempt the ones he could not. If it was 50-50, he didn’t try it.

READ MORE: ARE YOU NEGLECTING TO PRACTICE THIS ESSENTIAL SKILL?

Good players don’t like those odds. Good players are not gamblers— they are performers. That is why great plays are not what make an outstanding player. It is knowing limitations.

A good player knows that he doesn’t need a slam dunk in the final seconds to be credited with winning the big game. If he can stop his man from scoring and go down to the other end and get a good shot, he can win the game just as well. And more often. He isn’t running around searching for a way to look spectacular; he is out there trying to get a job done, doing “whatever it takes.”

If somewhere along the line he gets a chance to do something spectacular, fine, that’s icing on the cake, a bonus. But he doesn’t seek it out. His concentration is on the little things, playing the game right, getting good defensive position, being there for rebounds and always taking high-percentage opportunities, whether shooting, passing, stealing or penetrating.

A lot of players are potentially good. They try hard to show everyone how good they are, how many great plays they can make. Along the way they make some great plays, but they also make a lot of mistakes.

They go quickly from good to mediocre, and many of them spend their entire basketball careers hearing coaches say, “You could be good.” But they aren’t.

Good players get the job done. They do the little things and are always looking to do just a little…
Click To Tweet

Good players are those guys who get the job done, who do the little things and who are always looking to do just a little more. They have the habit of usually making things appear quite easy. Often, they can be pretty boring since their pride is in playing intelligently. They don’t like looking stupid or missing dunks that should have been easy layups. They would rather have fans go away disappointed that they didn’t do anything spectacular than to hear someone saying their stupid play lost the game.

Good players have a pride about things like that. It’s not just that they don’t want to be labeled “erratic.” They really don’t want to make any mistakes at all.

It’s Not What You Do, But How You Do It

The following video is with Dena Evans, Owner and Director of PGC Basketball

To learn more about PGC Basketball, including additional training tips and videos, you can visit their YouTube Channel