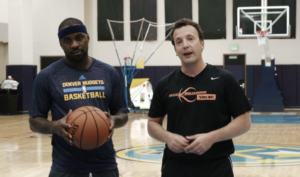 When working with young point guards, I’ve found there to be two common deficiencies in their understanding of pick and roll play.

The first nuance they don’t totally grasp is the art of deception both directionally and in a speed sense. Most young point guards come off a pick & roll at one speed in one direction without recognizing the need to set the on-ball defender up with a foot/ball fake away from the screen and a change in speed as you encounter the screen.

The second problem is the lack of understanding of the physicality you need to play with as the ball-handler. Great stuff below on how NBA point guards use their body when coming off screens.

-Linked below is a fantastic video of Ty Lawson explaining “how to put your defender in jail” (or what John Beilein calls a “Hostage Dribble”) put together by BBALL BREAKDOWN.

You will need to click the play arrow to view it.

This article was written by Brian Anglim. Brian has coached basketball at both the high school and college levels.

In my last article I discussed the idea of instituting a rule of only allowing strong hand finishes during the season. The conclusion I came to is that players would have to earn an “off-hand finishing license”. If they did not show competency prior to the start of the competitive season, they would be limited to using only their strong hand. This would not be a punishment rather an motivator and a sacrifice for the betterment of the team.

In my evolution as a basketball coach, I have drawn greatly upon my study and work as a personal trainer. I have gotten into the fitness world (and I have been bit by the crossfit bug) and it has given me some fascinating insight into developing basketball players. One thing we will do with a training client is developing different phases or cycles in which we focus on certain areas of development and build upon each of these cycles to allow a client/athlete to peak at a certain time. I think this concept has tremendous value in the basketball world. I would break weak hand development down to four phases for an athlete that has not earned their “off-hand finishing license”. Having a long term view of skill development can allow you to put the teaching pieces together in the most efficient manner.

Phase One: In Season

In an effort to maximize practice time I would not work directly on weak hand finishing. To get to a high level of success it would require a great amount of practice time that might be better used in other areas. However I firmly believe that in-season practice has to still be centered around long and short term skill development. I would work on foundational skills that would lead to weak hand development but not work on them directly.

In the personal training world we put a lot of emphasis on the warm up. Although most people see it as a period of injury prevention and it is, it also is a time to practice and refine movement. We would use this time to perfect the key movement patterns that we would later be attacking with heavy weights. Those 5 to 10 minutes might seem like a waste, but those 5 to 10 minutes happen before every training session. Over time they build upon one another to eventually lead to mastery.

Let’s say that I have 60 basketball practices a year, if I dedicate 15 minutes to a warm up that is 15 hours of practice time. If I take 4 minutes of those 15 minutes to develop hand coordination, fingertip control, and concentration skills over a period of a season and a players career it will have tremendous impact. To me the opening of every practice should contain some combination of the following drills

Ball slams – slamming the ball from one hand to the other, this warms the hands up and improves getting that hand around the ball which is crucial to controlling it. It helps with catching the ball and encourages getting the hand around the ball with the fingertips.
Spins, flips, and flops – this are the classic drills where we spin the ball around our waste, slam it between our legs, or flip it from one hand to the other. These drills might seem basketball campy to you but to me there are crucial to long term development (and have tremendous benefit to younger players). They develop that fingertip and manual coordination. They also push players to move their hands quicker .
Two ball dribbling – I have a lot of two ball dribbling drills that I need to create a video of, I love these as they develop coordination with the weak hand, refinforce rotating the hand to different position on the basketball, and develop hand quickness.

If these drills were executed at the start of ever practice with maximum intensity (intensity is key) you will see great improvement in there ball handling and hand quickness throughout the season and their career. These drills also develop the manual coordination with the weak hand that will later allow us to naturally finish plays.

Once we have shown competency in a skill session, we want to add contact and other variables to increase the difficult of the finish. Such things would include contact from coaches, managers, or blocking dummies. We might add other ball skills with the finish, for example a chair such that we have to execute a change of direction move. We also encourage players to use these finishes in our scrimmage and summer league games.

I am also a big believer in creating situations that lead to natural applications of skills, for example a 2 on 1 fast break drill versus a shot blocker. This gives you tons of reps against a shot blocker from a variety of angles, thus giving us constant variance that we would find within the game.

After watching your player execute finishes in drill situations, live, and controlled scrimmages, we can evaluate their skill level and determine its viability.

These 4 phases would allow you to create a yearly plan for an athlete, but think even longer term than that. We often have players for a career, map out a 4 year plans for your players to maximize their development. If you have the end in mind the importance of building that strong foundation becomes apparent.

If you are interested in more quick tips I encourage you follow me on twitter at CoachAnglim. As always , I love feedback. Drop me a line at [email protected]