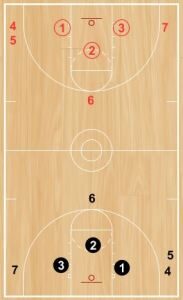 This basketball shooting drill is from Mike Neighbors of the Arkansas Women’s Program.

I think it is good to collect a variety of drills so that you can continually add in new drills for variety as the season unfolds to keep things fresh for your players.

At the bottom of this post are links to other drills as well as other posts from Coach Neighbors.

With a large team we had to tweak some of our shooting drills this season.

This is one we “accidentally” created from our One Minute, One Spot shooting drill.

Divide team evenly as possible on both ends. Each end has three balls.

Encircled numbers in the diagram represent the three passers with basketballs at each end.

Passer will pass to shooter then take spot in line. Shooter will shoot and rebound make/miss and pass to next person in line. 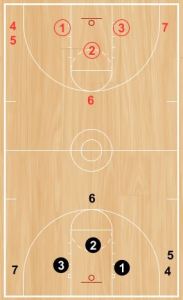 We shoot in this spot for 1:00. We can record three things if we have enough counters. Each group score per spot, each end score per spot, and total score for team on both ends. 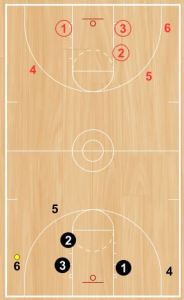 (The five spots are both corners, both 45 degree angles, and straight on from the top of the key)

I love the variety, the number of shots we can attempt in a short period of time.

We have only done this once so expect scores to improve, but first totals were: