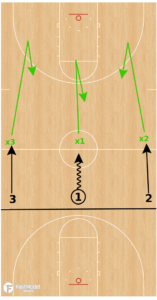 This post was contributed to the FastModel Sports Basketball Plays and Drills Library by Randy Sherman of Radius Athletics.

Competitive version of shell drill where a score followed by a stop equals a point and a team must gain three points to win. Drawn 3v3 but can be 4v4 as well. Setup and rules in frame descriptions.

Radius Athletics exists to serve, grow and develop basketball coaches at all levels. How do we do this? Simple.

An “Essentialist” approach to creating a program identity

Modernization of the professional development model for basketball coaches 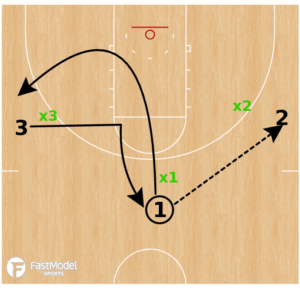 Once the ball is crossed over half court the offense runs the guided shell action of the day. Examples:

The teams compete until a shot is taken. If offense scores, the offense and defense switch roles. In order for the basket to count the offensive team that is now on defense, must get a stop to accompany their basket.

A basket followed by a stop counts as one point.

Advance this drill to 4v4 as well