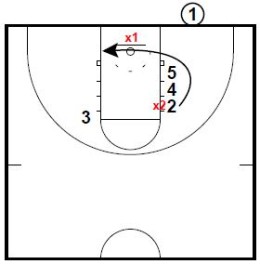 This play is designed to attack teams that sag the inbounder defender in the paint to help take away layups at the rim on UOB situations. 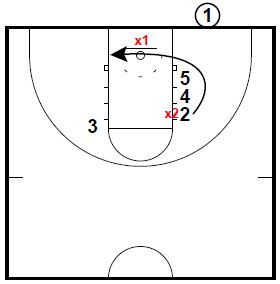 The 2 player will curl around the stack looking for the pass from the 1 player.

X1 will help on the cut by the 2 player, which we want. 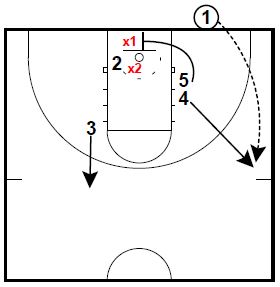 As soon as the 2 player curls around the stack, the 4 player will pop out to the wing for the pass.

The 5 player will cut to set the screen on X1 helping on the curl.

While X1 is helping on the curl, he will get screened in by the 5 player. We use the curl cut to allow X1 to help, thus setting up the action. 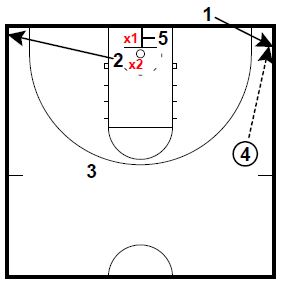 The 1 player will pass the ball to the 4 player and quickly step to the corner for the 3-point shot.

Anytime we see a team that helps big in the paint on UOB situations, we will automatically attack with a
counter attack on that defender.

We like to force help at the basket and at the same time screen the helper inside the paint.

Sometimes, the 2 player will block X1 in on the curl, thus setting a double screen.