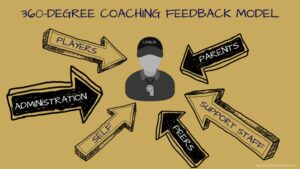 This article is republished with permission. The original article appears at Using 360-Degree Feedback to Enhance Your Coaching.

Matt’s suggestions are based on his review of coaching and 360-degree feedback research from sport and business, as well as conversations he had with several head coaches of Canadian intercollegiate sport teams (Full research article is available at the end of the blog).

Most basketball coaches, like all coaches, are constantly trying to improve at their craft. One way to improve as a coach is to gather feedback about your coaching. You might already be doing this to some extent, either formally with end-of-season surveys or informally by talking with others. 360-degree feedback is a more comprehensive way of obtaining feedback and is something that most coaches do not take full advantage of.

With 360-degree feedback, a coach gathers anonymous feedback from multiple people. These people can include but are not limited to players, assistant coaches, athletic directors or sport administrators, other coaches, or mentors. Parents could even be included at the youth sport level. The goal is to collect feedback from people who can provide different perspectives on your strengths and weaknesses as a coach.

Another key aspect of this feedback system is that coaches can evaluate themselves and compare it to others’ anonymous assessments of them. This really has the potential to boost your self-awareness as a coach.

What are some potential benefits of using 360-degree feedback?

What are some potential challenges of using 360-degree feedback?

Suggestion: Using online survey platforms can be a huge help, and people (especially younger generations) usually like using technology. Players will probably feel more comfortable completing surveys on their tablets or cell phones. Of course, setting up an online survey will still require some planning and organizing on your part.

Challenge: There are no set guidelines on when and how often during the season to collect 360-degree feedback. There just isn’t enough research on this yet.

Suggestion: Aim to gather feedback at regular intervals—maybe 2 to 4 times during the season (depending on the length of the season). The goal is to collect feedback throughout the season—not only once it is over.

Challenge: There are no set guidelines in terms of which people should be included in the feedback process.

Suggestion: Of course, there are obvious people (players, assistant coaches) that you should include. However, you also need to determine who else can provide you with relevant feedback on your coaching. Maybe there are coaches from other teams who have watched you regularly and might be able to provide you with useful feedback? Maybe you have some mentors who could watch you at practice and provide feedback? Explore all your options.

Six Suggestions for Getting More Useful (And Less Negative) Feedback

Because 360-degree feedback is provided anonymously, you risk receiving large amounts of negative feedback. Similarly, because surveys with numerical rating scales (e.g., “On a scale from 1-5, rate how effective [name of head coach] is in organizing team practice”) are typically used to collect the feedback, you might be provided with information that lacks detail and depth.

Obtaining 360-degree feedback throughout the season has its challenges and might not be feasible for all coaches (some organizations have their own coach feedback systems in place). Further, some 360-degree appraisals can lead to negative outcomes (e.g., feeling discouraged when receiving negative feedback). However, if you can incorporate some of the evidence-based ideas outlined here into your “coaching toolkit” and gather some additional feedback that you are not currently obtaining, then you might become more self-aware of your coaching behaviours and how you can improve as a coach.

Rather than viewing 360-degree feedback as a performance evaluation, I encourage you to think of it as a developmental opportunity to enhance your coaching. At the very least, I hope this post gives you some ideas to reflect on moving forward.

If you are looking for coach feedback questionnaires, consider the book, Coaching Better Every Season: A Year-Round System for Athlete Development and Program Success, by coaching expert Dr. Wade Gilbert. This book provides a nice overview of surveys that you might consider using for coach evaluation purposes (including 360-degree feedback).

You can view or download the full article in the International Sport Coaching Journal 360-Degree Feedback for Sport Coaches: A Follow-Up to O’Boyle (2014)

Matt Hoffmann has a PhD in Sport Psychology from the University of Windsor. His research mainly explores the benefits of peer mentoring among athletes. He is also interested in coaching, athlete leadership, and other group dynamics topics. For updates on sport psychology research and other sport-related topics, follow Matt on twitter @Hoff_MD