This 4 on 3 Scramble Defensive Drill was posted to the FastModel Sports Basketball Plays and Drills Library by Matt Wheeler.

Matt Wheeler has spent the last 10 years coaching in the Orlando, FL area.

This defensive drill works on defending scramble situations when the defense is temporarily outnumbered. Once the ball is entered the drill is live and the offense tries to score 4v3. The 4th defender can enter play after 7 seconds or after a shot is taken. The three initial defenders will not have a match-up, but whoever is closest to the ball must pick it up as they buy time for the 4th defender to get on the floor.

To add a communication component to the drill, require defenders to say “I Got Ball” when they closeout on the ball so they don’t accidentally get two defenders on the ball. If a defender is in a situation where they are guarding two people, have them say ” I Got Two.” The 4th player enters the floor going furthest from the ball. They must communicate who they are guarding and tell their teammates where to match up so they can get out of the scramble situation.

The offense starts with 3 players on the perimeter and 1 and in the paint.

Coach passes to 4 in the paint.

All 3 defenders look to strip the ball from 4. 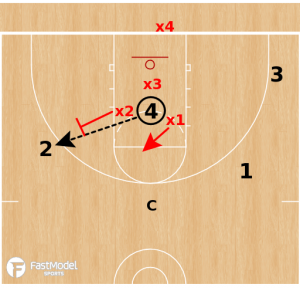 4 passes to the perimeter and the offense plays live 4 on 3.

The defense must scramble and obtain new matchups as the ball moves.

The 4th defender enters play seven seconds after the ball is passed to the perimeter.

Make sure that your sound is on and that you are on a server where you can access YouTube to watch the video below.