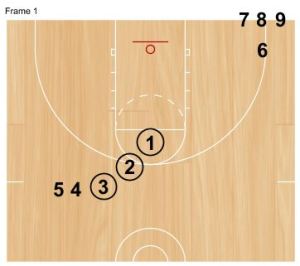 Today’s post is another great competitive basketball drill from Coach Mike Neighbors Washington basketball coaching newsletter. He sends it out each week. If you are interested in being added to his list, please email me and I will pass it along to him.

Here are his thoughts on what makes a TEAM Drill Competitive:

1) YOU DO!! Or another coach who has passion for the drill to keep it energized.

2) CHART IT… Must have a time/score with a winner/loser to keep most competitive players engaged. 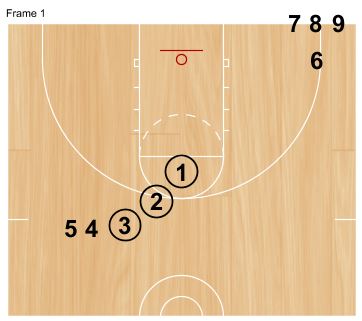 This has become our day before the game shoot around “contest” drill.

Passing line with three balls in the key. Shooters coming off the baseline.

In this diagram players 1-5 are the passing line. Players 1, 2, and 3 have basketballs. 6 is the first shooter up and 7-9 are waiting in line.

This drill can be done with any number of players/coaches. We always jump in to loosen things up from time to time.

The overall goal of this game is to have the FEWEST points possible. So like GOLF, low score wins.

We stay at spot 1 until someone accumulates 10 points and is eliminated.

Once you have UP points you have them for the remainder of the drill. It is similar to H-O-R-S-E. Once you accumulate 10 or more points, you are out of the drill and can shoot free throws or work on other skills. 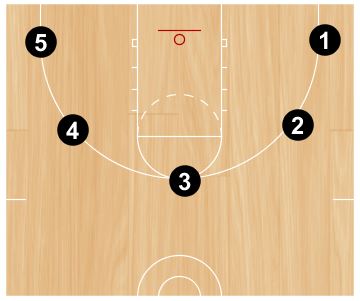 This diagram illustrates the 5 shooting spots for the drill with black circles. Each spot is on the arc because the players have a choice of shooting a 2 or 3 point shot.

After one shooter gets 10 UP and is eliminated, we move to spot #2. All shooters points carry over.

We repeat this until we are left with only one shooter with less than 10 points!!

You’ll be shocked at how few times your “best” shooter will win this drill.

It puts you in pressure situations. It forces you to understand score. And most importantly focus on making shots.

I have been eliminated in this drill many times after having ZERO total points through 5 or 6 spots only to miss at the end of one long string and go from ZERO to OUT!!!!

One year we took an old weight belt and had a manager dress it up to look like a World Championship Wrestling belt for the reigning 10UP Champ to wear out to the floor on COMPETITION
DAY.

While this drill is light and fun, you can keep it competitive. We made this drill optional for a while but noticed our best shooters sometimes were afraid to jump in at the risk of not winning.

You WILL find your pressure shooters here!!!!