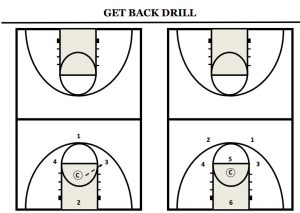 These notes were taken from the Universtiy of Washington women’s Packline Defensive Philosophy.

It was posted in on of the Xavier Men’s program’s newsletters.

The Husky PACK LINE is a proven winner for us. It meets all the standards we have for anything that we do within our program philosophy wise.

1. Can it put you position to BEAT the BEST teams on your schedule?
2. Can it win on the Road?
3. Do you improve as the season progresses?
4. Can you advance in post-season tournaments?

This gives our players the confidence to apply ball pressure and the individual accountability that we are only asking them to be really effective in containing the dribble three feet in either direction. With the other 4 players properly positioned, the ability to GUARD YOUR YARD is a non-negotiable skill in our attack.

Move on the Air Time of the Pass: the instant the ball leaves the fingertips of the passer it is a non-negotiable factor that all five of our players are on the move to their next responsibility on the court.

(For more details about their system, download the entire pdf from the link at the end of ths post)

We can call any combination of the mentioned actions to create a variety of options as to how we will defend the PNR action. Communication of the call is key and must be executed properly by both of the defenders involved in the action. The decision of how to defend the PNR will depend on the strength and weaknesses of the personnel involved in the offensive action. That comes through scouting as well as in game adjustments.

Armed with these varieties and an easy manner in which to communicate them, we have had success over the years making calls on the spur of the moment when we get a “call” on a set play or see an action being set up in a last second situation.

To recap actions of defender guarding the ball:

To recap actions of the defender guarding the screener:

A. Hedge- force ball handler two dribbles toward half court before recovering
B. Plug- force the ball handler side-line to side-line
C. 4th- jam the screener as not to allow her to move screen down and stay connected to her
D. TRAP- stay with ball handler and trap with teammate until stolen or ball passed out.

Obviously incorporating the other three defenders is a huge key, you must first master the two
player defending of the various offensive actions.

We will work two or three days incorporating
ball actions with non-ball actions in our 4 around 0 Shell Drill before introducing the three remaining defenders. 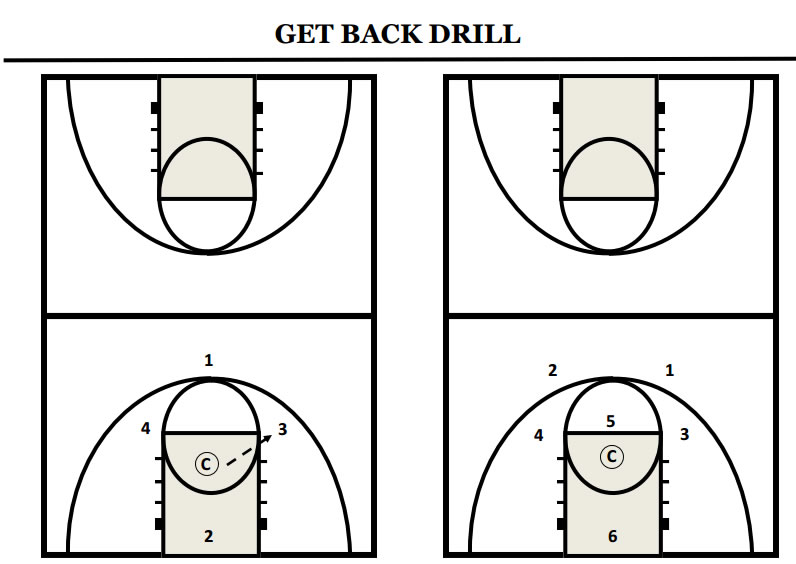 Players 1 and 2 are on offense and will convert to defense. Players 3 and 4 are defenders. Coach has the ball. Tosses the ball to 3 or 4. 1 turns and SPRINTS back as the FULLBACK. 2 then must SPRINT back to get AHEAD of the BALL and try to slow the attack.

In diagram 2, we have added player 5 on offense and player 6 on defense to simulate 3-on-3 play.

We will slowly begin to add players and manipulate the number of defenders to get the advantage/ disadvantage situations in which we drill.

To add to fun of the drill, after the coach passes the ball to the offense we will turn and using a blocking pad try to impede the progress of the last defender. 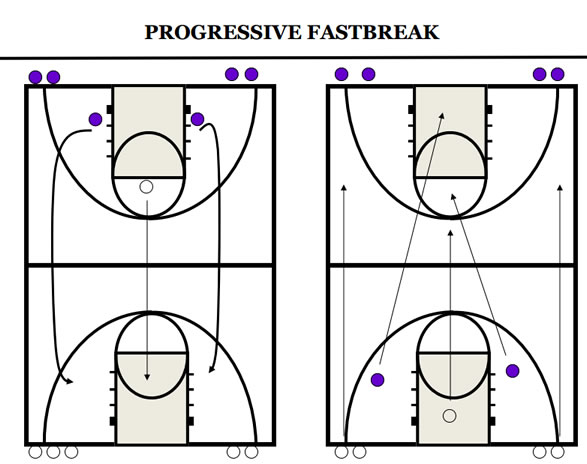 Divide team into two colors. Try to get even number of guards and forwards if possible but not critical. We score the drill as a normal game with 1s, 2s, and 3s.

White team player attempts a FT. Two Blue defenders play the make/miss. The white player who attempted FT retreats into a 2 on 1 defensive situation against the two blue players.

They play the possession until a basket is scored or the defensive player comes up with the stop.

Complete this possession then without stopping add TWO blue team players and they attack in a 4-on-3 situation… this continues until you have built it into a 5-on-5 situation. At the completion of the 5-on-5, start again with BLUE team player attempting a FT.

We like to play until each player on each team has attempted a FT or to a certain number of total points. The main thing is that each team has equally number of opportunities to score.