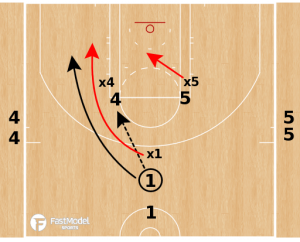 3 on 3 drill to work on icing ball screens.

The drill was contributed by Ryan Nguyen to the FastModel Sports Basketball Plays and Drills Library.

Ryan’s comments on this drill:

Continuity defensive drill from the Los Angeles Lakers from their pre-season Training Camp.

This drill works on side pick and roll defense where the defense looks to Ice/Blue/Push/Down, depending on your terminology.

The on ball defender adjusts their stance to be on the top of hip of the ball handler.

Goal is to prevent the ball handler from using the ball screen to get to the middle, keeping the ball on the sideline/baseline on the pass and follow action.

On the throwback to the screener, the on ball defender works for a lock and trail.

x5 drops to the mid-line 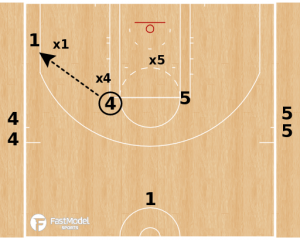 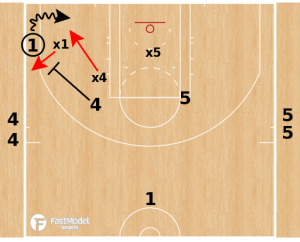 4 passes and follows into a ball-screen for 1

On the pass, x1 jumps to the ball-handler’s top hip to force the ball baseline working on stance in “ICE” defense

1 takes a dribble or two and throwback to 4 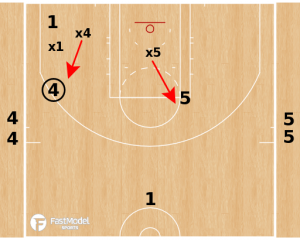 x4 recovers and closes out to 4

x5 pushes out to his man and deny 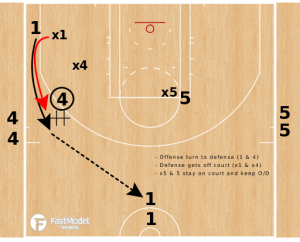 1 sprints into a handoff with 4.

1 passes back to top 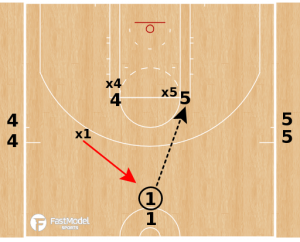 – Defense gets off court and rotate new players

– Same drill but on other side of floor