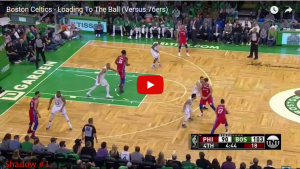 Coach Boisvert has posted several videos of some of the better schemes he has seen. His YouTube channel is: Zak Boisvert You Tube Channel

Editor’s Note from Brian.  There are two videos on this page–the second is an older video of some defensive conversion concepts from Jeff Van Gundy.

There is no narration with this video.

This is a YouTube video. If you are having trouble viewing it, the reason could be that the network you are on blocks YouTube videos.

These are some of Coach Boisvert’s comments on the video. Here is a link to his complete article: http://pickandpop.net/2018/05/loading-to-the-ball-vs-great-transition-pg/

In order to stop the great transition point guard (in this case, Philly’s Ben Simmons), the defensive big sprints to get ahead of the ball and shows his body to prevent middle penetration by the ball-handler (effectively “building a wall”). A trailing big who can really shoot it can hurt this tactic, but as you can see in the video below, the strategy still allows the defender to get out to a proper closeout. The defensive bigs’ positioning in the gap ahead of the ball allows him “One Way Out” movement in that he’s not moving in to help on penetration and then moving back out, rather he’s already positioned to stop penetration and he just moves in one direction to closeout.

This would be a great video to show to your players. Ask your players to watch the constant pointing/talking being done by all 5 guys in a Celtics uniform. Also, have them pay attention to the last 2 clips that aren’t examples of the “Post Shadow” that’s discussed above, but it’s unbelievable effort by 5 players to get ahead of the ball and make Simmons see bodies in transition.

Embedded below is a defensive system tape put together by Jeff Van Gundy and his coaching staff (which included Tom Thibodeau and Steve Clifford, and ) in the late 1990s with the New York Knicks. This is a comprehensive guide to Van Gundy’s defense and a great resource for coaches at all levels. I appreciate Michael Bowden for posting this.