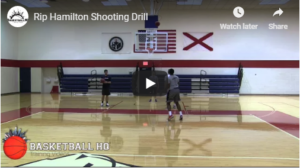 This toughness shooting drill called “The Rip Hamilton Drill” and is among the resources for both coaches and player available from basketballhq. They have several more videos as well as basketball coaching resource articles.

The Coach in the video is Russ Willemsen from the South Alabama men’s staff.

To score a point in the drill, the player must make 2 shots in a row from one spot. One shot is a catch-and-shoot three-point shot, the second shot is a one-dribble pull up. The shooter should alternate those shots until they make two in a row. When you do the drill live, shoot pull ups going right for the first 2 minutes and 30 seconds, then shoot 5 free throws. Finish out the last two and a half minutes with pull up shots going left.

The goal of the drill is to score as many “spots” as possible in 5 minutes. Since the video is a demonstration, the shooter only shoots for 2 minutes.

If you run the drill for 5 minutes, there certainly is an aspect of mental toughness as players need to fight through consecutive misses.

I have also posted a second shooting drill video below.