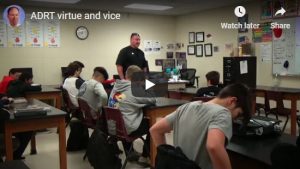 The R.E.A.L. Man Program is a strategic and progressive character development program designed to help middle school, high school, and college-aged students to reach their full potential, in every aspect of their lives.

The 20-lesson program is a blueprint for success, which is aimed at helping students understand and live out the principles of a positive and influential life.

The foundation for the program can be described as:

Respect all people,
Especially women.
Always do the right thing.
Live a life that matters.

Here are a three videos about the R.E.A.L. Man Program.

There is sound with each video.

Or click here to visit The R.E.A.L Man Program

Please click the play arrows to view the videos.

Learning to do the Right Thing

Why Norms are the Driver of Team Culture

On a scale from one to ten, how important is having a positive culture to your team’s ability to reach its potential?  When I ask coaches this question, most of them answer in the nines and tens.  Even the most inexperienced of them agree that, like it or not, the team’s culture holds the key to a team’s capacity.  Talent is the foundation for winning, but culture is the guiding force that determines a team’s potential.

Even the least talented team can enjoy its experience if it’s imbued with a positive and motivating culture.  Let’s face it, only one team will win the conference championship.  However, every team will rise to its capacity if its culture is carefully nurtured.

Think of culture like a vibrant and dynamic river.  All rivers are powered by the volume of water, the pull of gravity, and the focus produced by a river’s banks.  The volume of water comes from many small sources—tributaries—flowing in the same direction and landing in the river.  Think of a team’s members as the many small sources, each contributing volume to the rush of the river that is the team’s culture.  The pull of gravity provides force as the river rages toward its goal—the ocean.  And just like the ocean, team’s pursue an ultimate goal—a desired end-state.  The banks, like a team’s norms, provide boundaries that serve to concentrate and funnel the flow thereby giving the river more force and power.  A team’s norms contribute to its social structure that like the river’s banks provides stability, direction, and intensity of organized effort.

Unfortunately, many teams are more like puddles or ponds than powerful rivers.  They stop-short of reaching their capacity and the team experience becomes one of struggle, conflict, and dysfunction.  The channeling effect of the river’s banks makes all the difference between a puddle and a vigorous and focused river.

So, how do you go about creating a high-performing team culture?

The golden rule of culture building is found in relationships.  How team members interact and the kinds of relationships they form has everything to do with what kind of culture emerges, has everything to do with the emergence of trust, commitment, and individual and team performance.  Much of the success of a team lies in the crafting of a sense of “us.”  It lies in the norms, values and priorities that emerge to shape the shared understanding of “who we are.”  A team’s norms channel the sum of all these forces.

Generally speaking, norms are shared standards that define what behaviors are acceptable and desired by a team’s members.  They are informal “agreements,” not formal rules or policies.  So much of how players see and interact with the social universe around them is shaped by norms which are developed, discovered, or invented aspects of daily situations.

Norms emerge and develop from individual behaviors that take place one-to-one, as well as team norms of one-to-many and many-to-many.  Two players may have a relationship that includes good-natured ribbing of one another, while the ribbing might not be a desired behavior in a team meeting.  Norms act as guidelines, embedded rules of behavior if you will, that inform behavior and expectations in interpersonal interactions.

In the scheme of the well-worn Tuckman’s five stages of a team—forming, storming, norming, performing, and adjourning—the norming stage occurs when conflict has been resolved and team unity and harmony emerge.  Once the norming stage kicks into gear the aspirations of the team become visible and elicit inspiration.  A team that has achieved a high degree of maturity relating to team norms is likely to have a strong culture, whereas an immature team—low agreement and adherence to team norms—is likely to have a weak culture.  Simply said, norms are vital for developing a high-performing team culture.

During this stage, team conflict and chaos subside as the team achieves a sense of cohesion.  When the team reaches this stage, team members feel a sense of unity and responsibility to other team members.  Encouragement and acknowledgement of individual and team successes are the norm and commitment to team goals begins to take shape.  A collective identity materializes.  Close relationships will bring trust allowing team leaders to offer team members more constructive feedback.

Team leaders should know that their teammates might be asking themselves:

Do my teammates appreciate me for who I am and what I contribute?
What is my role on the team?
Do my teammates value me as a member of this team?
Who is committed to our team’s mission and goals?

Identify and find ways to break down “new” barriers that are limiting commitment to each other and the team’s goals.

Keep team members focused on the team norms-those acceptable behaviors that are shared by the team’s members.

Here’s a sample of norm statements:

▪We put team needs in front of our individual needs.  Encourage members to learn new things.
▪We are committed to open, honest, and tactful dialogue.  Everyone must speak and listen.
▪We support one another personally even when we are in conflict.
▪We challenge members to become a better person.
▪We respect one another at all times.  Yet we see each others’ bad habits and help them to work on them.
▪Each of us is to be aware of our impact on the others and seek to ensure that our ideas, actions, and emotions challenge and support the team.
▪Each of us is responsible for understanding and managing our own behaviors and emotions in ways that support the team.
▪Each of us is responsible for holding each other accountable for owning our behaviors and emotions and to helping us grow and develop as responsible people.

Coaching for Leadership: How to Develop a Leader in Every Locker. ($24.99)

The Academy for Sport Leadership

Dr. Dobbs recently joined Jamy Bechler on the “Success is a Choice” Podcast – hear his thoughts on team leadership and developing a leader in every locker here. 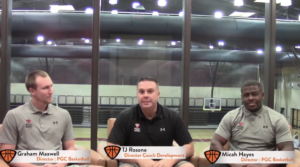 The three are Men’s Basketball Coaches at Emmanuel College in Franklin Springs, Georgia.

TJ is the head coach and Micah and Graham are assistant coaches.

The video has 4 ideas for building culture and enhancing your team bonding.

The second portion of the video has 3 examples of one minute drills that you can insert into your practices to develop fundamental habits.

Please make sure that your sound is on and click on the video to play.

The video is a You Tube video, so you need to be on a network that does not block You Tube access. 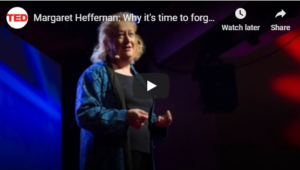 In it, she cites research by evolutionary biologist who studied productivity using chickens. William Muir devised an experiment to find out what would make chickens produce more eggs.

Chickens live in groups, so he selected an average group and left it alone for six generations.

After the same time span, only 3 chickens in group 2 were still alive—they had pecked the rest to death.

The highly productive chickens in group 2 only achieved their success by suppressing the productivity of the rest.

Heffernan’s contention is that we tend to run organizations, teams and even countries using the “super chicken” model—one in which success is achieved by choosing superstars and by giving the most talented or brightest individuals all the resources and power.

And the result is the same as with the chickens—aggression and dysfunction and ultimately inhibited team productivity.

You’ve seen this with sports teams built on the uber-talent of a few athletes.

There’s nothing wrong with having elite athletes on your team. But if you don’t find a way to create strong cohesion between ALL team members, you diminish the team’s ability to reach its full potential.

What can help you develop that kind of team cohesion?

Heffernan shares another study done by MIT researchers in which groups of volunteers were given tough problems to solve.

They found that the most successful groups were not those with 1-2 members with exceptionally high IQs, nor the groups with the highest aggregate IQ.

1       they showed high social sensitivity (empathy) to one another

The researchers learned that social connectedness separated the best performing teams from the rest. [Tweet That!]

Heffernan teaches that social connectedness naturally results from a culture of helpfulness where individuals understand that they don’t need to know or be everything, because they are around people who are good at giving and receiving help.

It’s an environment where, when things get tough, individuals have social support and know who to ask for help.

But a culture of helpfulness won’t happen unless people get to know one another.

get to know each other → culture of helpfulness → social connectedness

All this together is called social capital.

And social capital—the reliance and interdependence that builds trust—is the key to creating high performing teams.

It requires time to develop social capital. It doesn’t develop with a one-hit-wonder like a retreat or team building workshop at the beginning of the season.

Don’t get me wrong—that helps! It’s just not enough.

One company, for example, synchronized coffee breaks so that employees had time to get to know one another.

The result? Profits increased by $15 million and employee satisfaction saw a 10% rise.

That didn’t happen overnight, but it happened.

The time you invest in creating opportunities for your team members to get to know one another is not a waste. It’s an investment that will reap rewards!

Avoid super chicken syndrome by making time this summer to collect ideas and develop a plan for offering ongoing opportunities for your team members to get to know one another next season.

What motivates people is the bond, loyalty and trust they develop between each other. What matters is the mortar, not just the bricks. —Margaret Heffernan

Margaret Heffernan: Why it’s time to forget the pecking order at work