This drill was posted on the FastModel Sports Basketball Plays and Drills Library.

Place a cone at the feet throw line extended at the opposite end of the court. The offense can’t cut in towards the basket until after they reach that cone, which allows the defense a bit more time to catch up and avoids collisions at mid court. 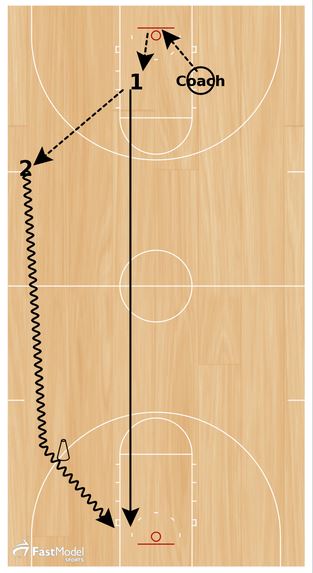 The defensive player works to track down the offensive player and make a play on the ball. It is important that players do not get out of control during this drill, and that they never hit one of their teammates while in the air…we don’t want anyone getting injured.

Instead, the defender needs to work on doing one of the following: sprinting in front of the offensive player; knocking the ball out from behind; blocking the shot from behind; or catching up completely and working to stop further penetration.

(Note: while this is primarily a defensive drill, it is also a great way for your players to learn to finish with pressure and/or small contact on the offensive side of the ball.)

The Coach tosses the ball off the backboard and Player 1 grabs the rebound. Player 1 outlets the ball to Player 2. Players 2 attacks the far basket as hard as they can and Player 1 sprints to catch up. Player 2 must wait until they reach the cone on the far end before cutting in towards the basket. 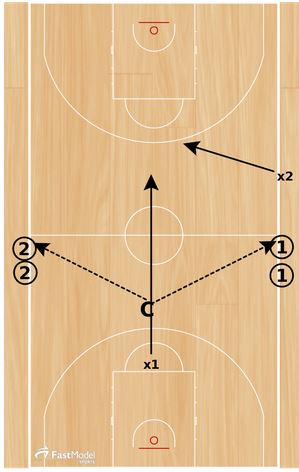 Offensive Players line up at half court line.

X2 lines up whereever the coach wishes to create different angles and timing.

X1 lines up at opposite free throw line.

Coach throws the ball to one of the offensive lines.

X2 comes in to stop ball, X1 comes in as trailer to become help defense.

Could also make this a live 2 on 2 in opposite direction after score or stop.