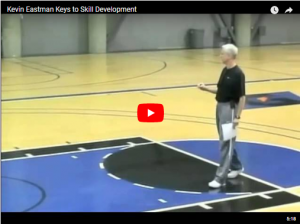 I was fortunate enough to meet him when he was here in Indianapolis at his Coaching U Live Clinic.

Kevin was a long time college assistant and head coach.

At that time he made the move to Los Angeles with Doc Rivers and was on the coaching staff last year.

He served as the Vice President of Basketball Operations for the Clippers before retiring in 2016.

This video is a segment from his NBA Drills for all levels course. It is a part of his 8 Video Coach Development 8 Course Series set which includes High Intensity Skill Development, NBA Drills for All Levels, Stimulate Your Offensive Thinking, Defensive Strategies and Teaching Points, Strategies and Philosophy for Coaching Success, Stimulate Your Defensive Thinking, Defending the Pick and Roll the NBA Way, A Champion’s DNA.

Coach Eastman’s 8 video course bundle is on sale as our Black Friday special. Normally, it is $112, but it is on special for $49 through Wednesday at midnight Eastern Time. After that time, the price will return to normal.

You can find out more about this special price at this link: Coach Development 8 Course Series