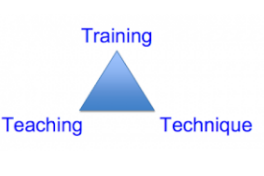 I hope that you might be able to use these thoughts to put together a similar system to get the most out of your spring improvement season individual skill workouts.

The diagram below is one I use on a daily basis when structuring practice.

It’s a great way to ensure the activities you are doing in practice meet the current needs of your team.

I’m not sure where I got it from, but I am confident I stole it from somewhere. Apologies to the person who didn’t get credit.

The triangle is used in two ways. First, I use it to analyze WHY I am doing a various practice activity.

I try to be very systematic about planning practice and using the right tool to teach a given aspect of the game.

To me, ANY team activity outside of warm ups fall into one of three categories:

The key here is to look at everything you do in practice and understand why you are doing it. If your players can’t tell you how to do something, then you need to teach (or re-teach) it. If they can correctly explain the skill, and preform it at game speed in a drill, then they need to spend time in training activities. At the same time you can’t jump into training activities before players can perform the movement correctly. It’s a important balance to strike in your practices, and is important to understand where your players are in regards to the skills you are trying to teach them. As a rule of thumb if they don’t know – I teach. If they know, but can’t do it – we drill technique. If they can do it correctly in a drill but not a game – we train.

I will use defensive slides as an example. At the beginning of the year I spend 5-8 minutes TEACHING the footwork. I demonstrate it (or have a player demonstrate it), then have everyone do it in slow motion. We might break into partners and do it in slow motion until everyone has a feel for it. I’ll even ask a few players how to perform the movement to see if they at least KNOW what they should be doing. After that we go through some traditional drills – mass stance, 1 on 1 dummy cut offs, etc. Once we see players doing it technically correct, we move into training. In training we play variations of 1 on 1 and 2 on 2 that force them to defend the ball constantly. As they play, I watch their form. If they start to develop poor technique, we move back to technique. We alternate between technique and training as needed, with the occasional “reteach” thrown in when warranted.

The other way I use the triangle is as visualization tool for how we utilize our practice time. When looking at various skills or tactics, I like to think about where the red dot would fall on the triangle from day to day, week to week, or even practice to practice. It’s a great way to monitor amount of time we are spending in a given area, and analyze if it’s meeting the needs of our players. Very early in the year the dot would be more toward the bottom middle of the triangle because we would be spending a lot of time teaching and drilling technique. By the end of the year we should be spending most of our time in training because we’ve learned the skill and gotten the technique down – hopefully.
Hopefully this is useful for you when it comes to practice planning. I’ve found it very beneficial and think it applies directly to making me a more efficient coach.