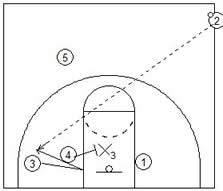 This play is a last second sideline inbounds play sent to me several years ago by Coach Ken Sartini who unfortunately passed away in January 2015. This is what he had to say about the play:

I designed this play at the end of one game… and we had a guard that was a soccer player so he could make that long over the head skip pass with some power to it. The first time we ran it we got the point guard #1 off the double staggered screen for a three.. he was fouled in the act and hit 3 free throws for the W!

This play is run with limited time on the clock when the pass receiver must catch and immediately shoot with no time for a dribble or pass.

3 must read the defender.

If 3’s defender (X3) is playing down in the paint, 4 screens X3 and 3 cuts to the paint and then step back for the skip pass from 2 for an immediate shot. 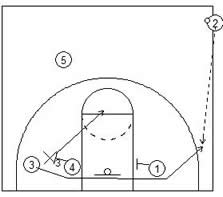 If X3 is playing out on 3 then 3 cuts baseline off double staggered screens by 4 and 1, to the ball-side corner.

After screening for 3, 4 moves to the high-post. 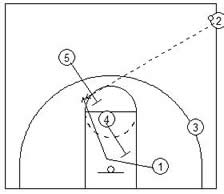 After the staggered double screen, 5 slides to the ball-side elbow and 4 moves to the opposite-side low block. The pass from 2 could go to 3, 5, 1, or 4. 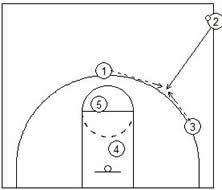 If 2’s defender is sagging way off, 2 could get the return pass and shoot if there is enough time on the clock.