Hudl picked the minds of a few athletic psychologists to find out why video should be a central part of any coach’s review process.

“Basically, we’re not great at being objective.”

This is the way Brett Haskell, an athletic psychologist at the University of Nebraska, describes the human brain’s ability to recall specific situations, and the sentiment is especially true in sports. Thanks to biases, stress, fatigue and the pressure of the moment, most athletes and coaches remember things differently from how they actually transpired on the court.

This is precisely why video review is so important. Video restores our brains with some of the objectivity lost in the heat of battle. As Texas head coach Shaka Smart told Hudl, “The tape don’t lie.”

So how exactly does a film session get our brains back on the right track, and how can you relay that information to athletes? We talked with Haskell and fellow Nebraska psychologist Brett Woods to find out.

Try as we might to remain objective, our emotions simply don’t allow it. The way we think and feel in the moment affects our ability to accurately recall it later.

“Our emotions can sometimes override our prefrontal cortex, which is responsible for evaluating performances, more of the logistics of evaluation,” Woods said. “That can color your perception of the event and your memory, your recall is more shaded by your emotional evaluation of the performance rather than the actual event that took place.”

Our memories are also fighting attribution bias – we develop an idea of how things are happening and interpret information through that lens. For example, if a point guard commits a few turnovers in the opening minutes that lead to fast breaks, a coach might carry that memory throughout the contest and think the player had a poor game, regardless of whether said player ended up with just a couple of miscues or a plethora of assists.

This is where video can help. The ability to go back and view the game allows coaches to rewatch it in a new light. Let’s return to the above example – that coach could create a playlist of that player’s assists and turnovers to make an accurate opinion on his play. And by rewatching the turnovers, he could discern whether the turnovers were his guard’s fault or due to mistakes made by other players.

Greg Eaton, the video coordinator for the Nebraska men’s basketball team, constantly stresses this point to coach Tim Miles, urging him to check the video before making final assessments.

“A box score accuses, the film provides evidence,” Eaton said. “You had four turnovers, the kid can say “I was pressured.” The video proves you made three bad passes.”

Stats come in handy here as well. Though statistics can be interpreted in different ways, they represent concrete information that lays out what happened on the court. Statistical reports can convey trends or patterns that you missed during the heat of the action. 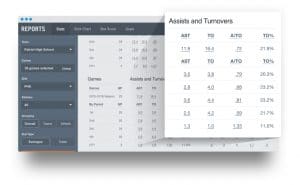 By checking out his point guard’s assist/turnover ratio, our coach would be able to form an unbiased opinion on his player’s performance.

Combining these numbers with video paints an accurate recap of the game, not the emotion-influenced version our mind remembers.

Once you have a bias-free account of the contest, it’s time to transfer that information to your players. Athletes experience the same attribution bias that coaches (and for that matter, fans) do, so teaching through video is critical, and the sooner the better.

“The closer to the event that you’re watching the feedback, the more effective it will be,” Woods said. “For instance, if you have an event on a Monday and you’re reviewing that video a week from then, your ability to retain that information and use it effectively is diminished because of the length between your actual performance and when you’re watching it.”

Not only is reviewing video good for your brain, but science shows it helps physically as well. The psychoneuromuscular theory hypothesizes that athletes can actually improve performance by seeing video of themselves or others.

“Basically when you imagine yourself doing things, through video or through your mind, the hypothesis is that it activates neural pathways in the same way as when you’re physically executing the skill,” Haskell said. “To a lesser degree, you’re getting physical repetitions through your nervous system even though you’re not actually executing the movement.”

It’s not just the psychologists and scientists that have bought into video – the elite athletes are fully invested as well. USA Basketball assistant director BJ Johnson said players such as LeBron James and Chris Paul devour video, studying their games to try and uncover any tendencies or weaknesses.

“Don’t just think you can go out and work on skills for a few hours,” Johnson said. “These guys spend hours, not only on the court working on their skills but also the mental part of it, which is through watching video. Dive into understanding how important it is to watch video and to watch games of yourself and other players. That’s really a key part of the development of a basketball player – understanding your tendencies and what you need to work on, but also picking up things from other players.

“Understanding offenses and understanding situations – that can only be done by studying the game and watching video.”

The top minds in both the athletic and scientific fields agree on the importance of video. But there’s an important factor for coaches to remember – like most things in life, too much of a good thing can become problematic.

This is why Maryland coach Mark Turgeon will watch six to eight hours of video in scouting each opponent but will typically show his players just 12 minutes. Overloading their minds with information can lead to diminished performance on the court.

“From a coach’s perspective, it’s important to know your athletes and how to give your athletes feedback,” Woods said. “At this level with elite athletes, you have athletes who are over analyzing every single little detail. Based on the coach’s feedback, the athlete can get too much into their head, which can be counterproductive to them performing. It’s critical for the coaches to know how to deliver the feedback while watching as well.”

Because of this, Turgeon typically doesn’t like players watching much video on their own until they become seasoned veterans. It’s important to monitor not only how much video your players are watching, but also the insights they’re gaining. You need to convey a specific message during each video session.

“You have to have a real sense of purpose when you go into video review,” Haskell said. “You don’t want to get stuck in that over-analysis or paralysis by analysis that athletes will sometimes get into.”

“Athletes need a lot of instruction on how to effectively review film so they don’t get caught in some of those thinking traps.”

Our understanding of video, recall and how our brains absorb information is still evolving and new discoveries are continuing to be made. But this much is clear – we can’t always recall an objective memory of an event, but video helps put together the pieces we might be missing.

Now that you’ve seen how important video is, get started using it. Check out Hudl Basketball and reap the benefits.