With all the duties on their plates, coaches don’t typically have time to tag their games.

But handing the duty off to someone else, such as an assistant coach or volunteer, could compromise the accuracy of the reports. That’s why many coaches, such as Jimmy Lallathin, choose to just suck it up and do it themselves.

But the head coach of St. Xavier High School in Cincinnati, Ohio, decided to switch things up last season. Lallathin took the help of Hudl Assist and felt the benefits immediately. Formerly the head coach at Kennesaw State, Lallathin had become accustomed to getting detailed, accurate data, and the quality of Assist stacked right up with the numbers he received at the college level.

“I was very accustomed to using the analytics part of it, so that was a natural transition for me,” he said. “I was very impressed with the accuracy. I felt very comfortable with the numbers. Especially for it being the first year, I thought it was really good.”

Lallathin found himself stretched too thin when tagging the games himself. He was already doing a deep dive for scouting purposes, and adding the tagging aspect was too heavy a burden.

“It was a real pain in the ass,” he said. “You’re tagging it, but you’re also scouting it, and you’re just trying to do too much. You have these weekends where you’re playing Friday and Saturday, and I’m not looking at Saturday’s game until Friday’s game is over. That’s a (pain) of a turnaround right there. I would have some assistants tag games in advance and it was good, but it just took a lot of time.” 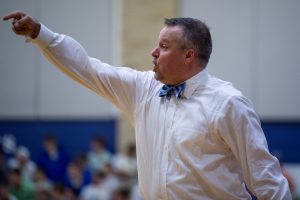 “Is your time worth your money? Quite honestly, my time is worth money.”

But it’s not just the statistics that fascinate Lallathin, who is entering his third year at St. Xavier. It’s the video behind the numbers that tells the true story.

Lallathin rarely live scouts opponents and, while he’d love to sift through entire game films, time constraints make that nearly impossible. But Hudl connects the stats to video, allowing him to quickly call up a playlist that shows him all video associated with the data.

“I’m a big video guy, so I watch a lot of video and it saves you time where, ‘This guy is averaging 18 (points), but how is he averaging 18?’” Lallathin said. “Instead of watching four or five games from beginning to end, I can just really quick refresh and go. I can kind of do an overview for a quick turnaround.”

Word about Assist is getting around, and Lallathin is quick to spread the message. He typically brings it up when exchanging video with other coaches, casually adding in comments about how Assist broke down his data.

“That usually perpetuates the question, ‘What’s that?’” he said. “I tell them and they say, ‘That’s fantastic!’ It’s a big deal. It’s a really big deal.”

Don’t be like those coaches. Get in with Assist now and revel in the accuracy and time-saving capabilities it supplies.