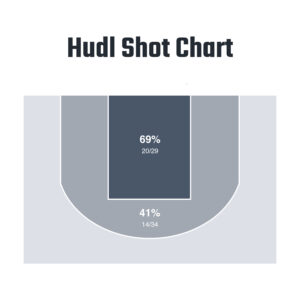 From the Hudl Blog

Shooting 57% from the field, the 6’3” Notre Dame guard made 25 field goals out of 44 attempts. He nearly duplicated this amazing feat a week later against SEC champion Kentucky and Big Ten champ Iowa, scoring 52 and 45 points respectively. His three-game shooting percentage was 58%.

Significantly, he was joined by teammate Collis Jones who averaged 23 points per game in the three contests. Together, they produced 228 points in three successive tournament games—an average of 76 points per game on 54% marksmanship.

Was this a one-year wonder? A statistical anomaly?

Add the next year of tournament play to the comparison, three games in 1970–71. That year, Carr and Jones combined for 195 points on 45% shooting, an average of 65 points per game. Over the course of six games spanning two tournaments, the duo produced 423 points, shooting 50% from the field and averaging 71 points per game. A two-man scoring record that has stood for fifty years—accomplished without the benefit of the three-pointer. 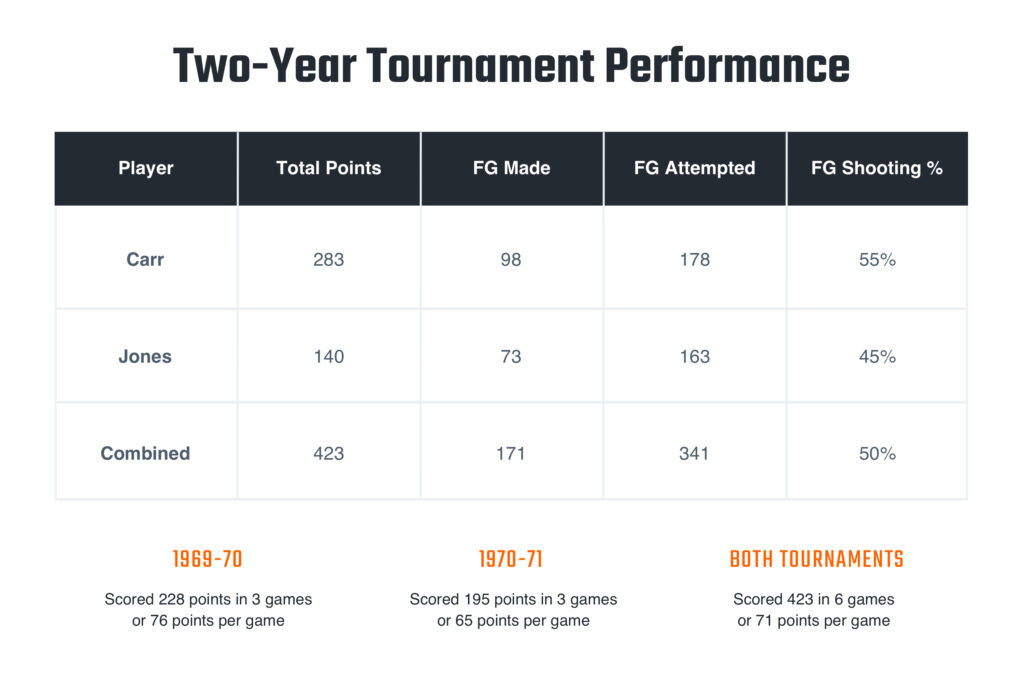 You don’t have to imagine how they did it—you can watch it. I created a highlight film of the Carr and Jones’ single-game scoring record against Ohio University in March 1970.

I also used mod­ern ana­lyt­ics to track their per­for­mance. Of 63 field goal attempts, the duo com­plet­ed 34, or 54%. Getting even more gran­u­lar, they com­bined for 61% shoot­ing with­in five feet of the bas­ket, and 50% from beyond five feet.

This feat only becomes more impressive once you compare their performance to today’s teams. Using only their three highest-scoring games, look at how the top sixteen teams in last year’s NCAA tournament stack up against the Carr-Jones tandem. 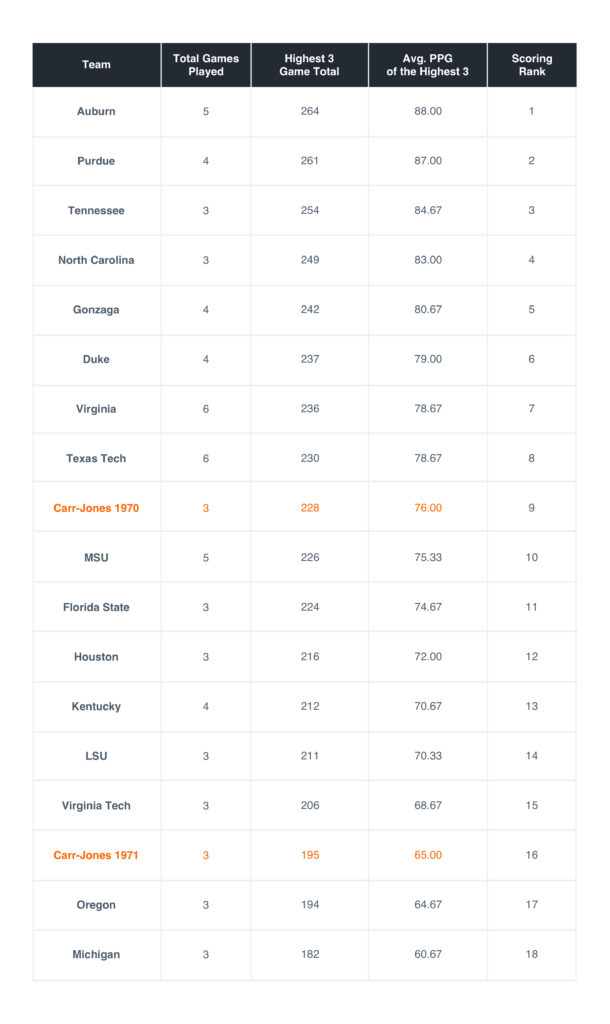 Amazingly, the Carr-Jones three-game performance in 1969–70 outranks eight of last year’s contestants. Their performance in 1970–71 bumps two of the teams, Oregon and Michigan, from the list altogether.

So will their record ever be broken? Not likely.

Today’s talent pool is shallower and less experienced than in earlier eras. Carr and Jones were both first-round NBA draft choices in 1971. In fact, Carr was the Naismith Award winner that season and was the first player taken in the 1971 draft. Both men were seniors with three consecutive years of varsity experience. Of the fifteen seniors who joined them in the first round of the NBA draft, Carr and Jones played against five of them in head-to-head competition. The best players of the day were seasoned competitors.

College basketball today is facing a talent crisis. A record-breaking 86 underclassmen were NBA early entries last season, and over 40 of them were not even selected in the draft. They left college and took their chances. Combine their departure with the steady stream of high school seniors who skip college for the G-League, overseas play or the NBA, and the pool of kids with sufficient talent and experience to break the Carr-Jones record gets pretty shallow.

And even though the three-pointer gives today’s shooters a huge advantage, the game’s slower pace of play generates fewer overall shot attempts and considerably fewer points. Consider the following chart: 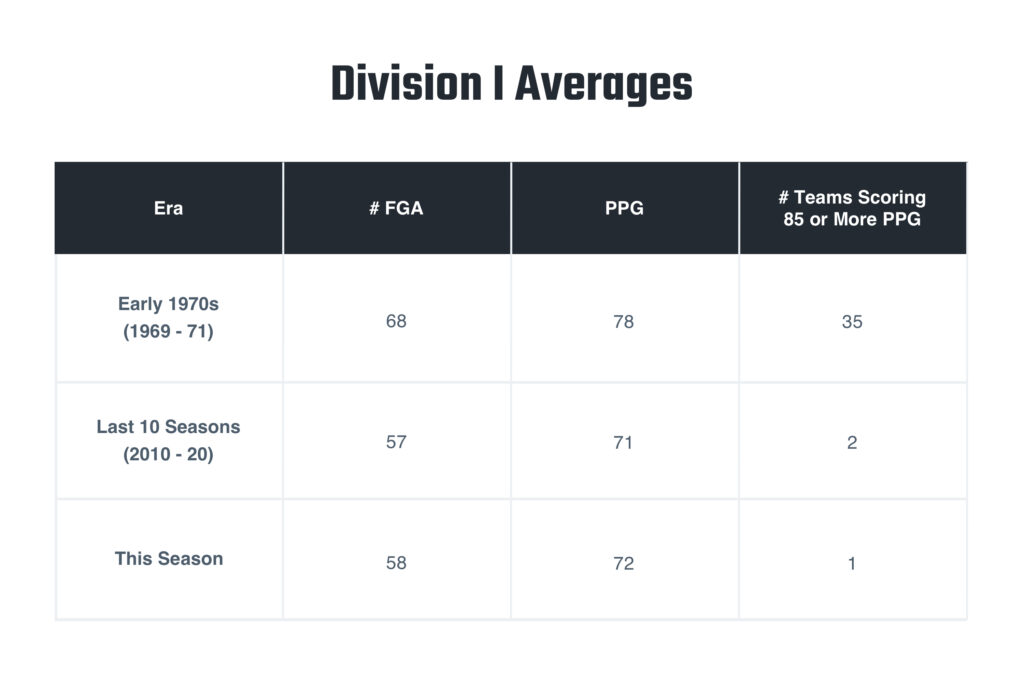 Fifty years ago, teams were attempting 11 more field goals each game and scoring 7 more points. Note in particular, the number of teams averaging 85 or more points per game in the early 1970s compared with today. Keep in mind that these are averages for the entire field of NCAA DI teams. If you drill deeper into the specific Carr-Jones record-breaking performances, the contrast is even starker. Here are two illustrative snapshots: 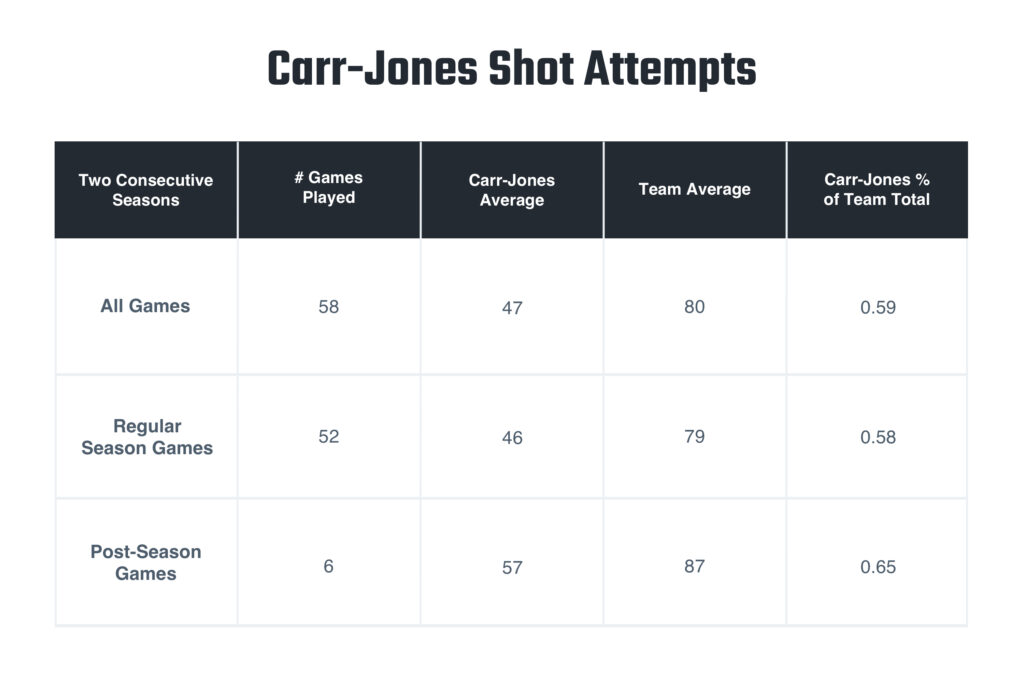 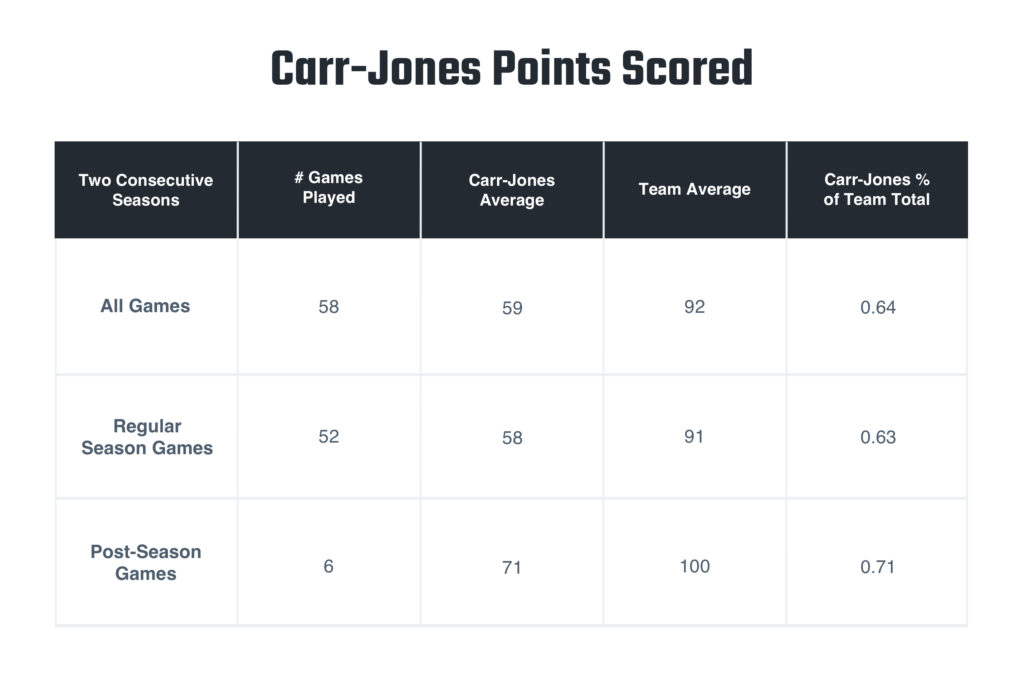 On average, over the course of two seasons, Notre Dame averaged 80 attempts and 92 points per game. That’s 22 more attempts and 20 more points per game than teams are averaging this season. The pace of play was significantly higher back then, generating more scoring opportunities for the team, as well as for Carr and Jones.

In their tournament game against Ohio University, when Carr set the single-game scoring record of 61 points, the pace was frenetic. On average Notre Dame shot the ball within 9.75 seconds of each possession, usually after one pass. Twenty-three times the Irish shot the ball within five seconds of taking possession, and only on three possessions did they take more than 20 seconds to attempt a field goal. The longest ND possession resulting in a field goal attempt took 25.3 seconds, nearly five seconds less than what today’s 30-second shot clock requires.

But could the record be broken?

Of course. Despite the shallower pool of highly talented players, in any given season there are enough great shooters who could make enough field goals to break Carr’s single-game tournament record of 61 points, or the duo’s record of 85 points. Especially given the multiplying effect of the 3-pointer.

But their multi-game tournament record, an average of 76 points per game over three or more consecutive games? I don’t think so. The overall pace of play today is simply too slow. Like hockey, basketball is a game of “shots on goal.” Quantity often trumps quality. You have to shoot a lot to score a lot.