Video could be the bridge to making your club an established brand. Let us show you just how easy and important it is to get started.

Last season, more than 35,000 high school basketball teams experienced the benefits of Hudl. More than half of the state champions used Hudl, and many more saw firsthand the power it can have in recruiting.

But high schools aren’t the only beneficiaries. We’re hearing more and more stories of club teams using Hudl to both improve their performance and their athletes’ odds of making it to the next level.

Here’s a quick crash course for other club teams that want to get in on the fun.

Get Your Players Noticed

Getting quality video is a major factor in recruiting. In order to get your athletes on the radars of college coaches, they must have quality video and highlights playing against top competition. Some club teams play more difficult schedules than their athletes see in their high school seasons, and college recruiters want to see prospects going against the best.

“The most important thing you want to do is show your ability to play basketball with video.”

Cedric Dashiell, head coach of The Basketball Factory in Calif., says the benefits of Hudl far outweigh the cost. Parents have already invested so much in their child’s development, and Hudl is the final step that can connect the skills that the player has honed to the exposure that will get him or her recruited.

What we do with our program is we talk ad nauseum, why are we doing this?” Dashiell said. “If we’re just doing this for basketball, that’s fine. But I want to do this to get these kids into college and get their college paid for. The only way schools are ever going to know about you is your film, period. I talk to the parents about how important it is, that if we’re not doing this, their kid may not have a shot to play. We have to get that film to the coaches all over the country. Because the parents know that, they’ll make whatever sacrifices to get that film.”

Level up Your Team

It’s not all about the future, though. Video also helps your team improve in the here and now as well. If you record while connected to Wi-Fi, you can watch pivotal moments of a game within minutes of its conclusion. You can now make adjustments on the sidelines between games.

There’s a reason the term, “Seeing is believing,” has stood the test of time. The ability to actually show players what needs to be fixed is invaluable. The athletes can access the video any time, and you can monitor how much they’re watching. Dashiell makes dozens of comments on every game film, offering quick reminders or corrections for his players to digest.

“We do it to get rid of bad habits,” he said. “We’re not talking about professionals, and on a team like this you have kids that want to play at the Division I level. If you’re walking on the court, we’ll call that out. If you’re being selfish, that’s now on Hudl.” 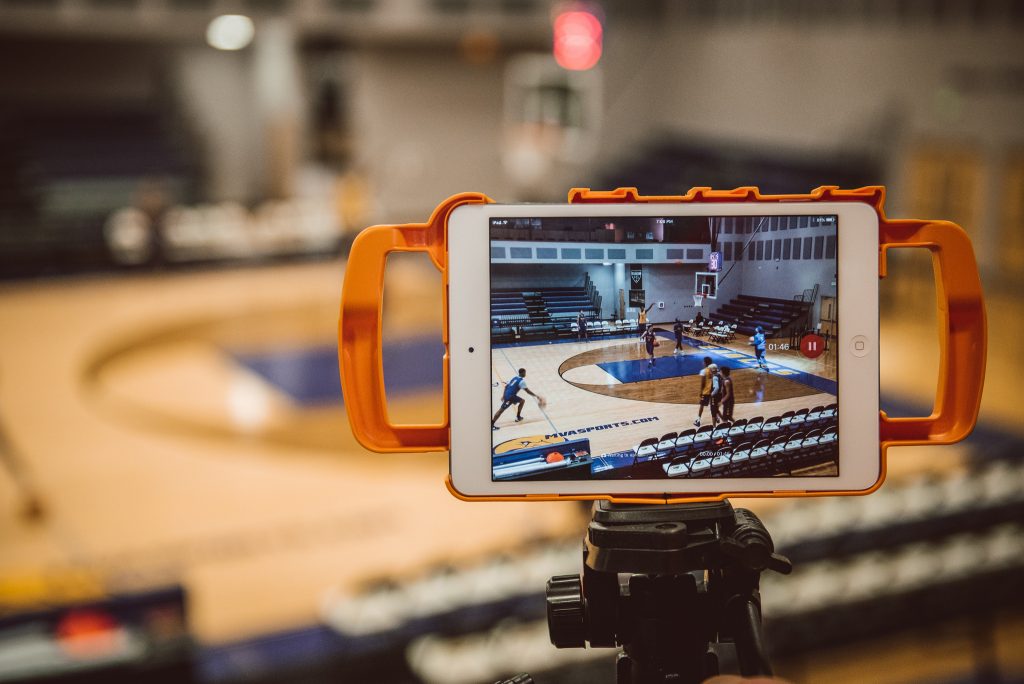 Not only is Hudl incredibly valuable to your club, but it’s a breeze to get started. We recommend recording with an iPad because of its ability to upload live (assuming the gym has Wi-Fi). A regular camcorder will do the job, but we’ve found the iPad or iPad Mini 4 seem to be popular among coaches.

To protect your investment, check out these cases from iOgrapher. The iOgrapher’s handles make for smooth transitions that limit bumps and jerks, allowing for higher quality video. Snap the iOgrapher onto a tripod like this one and you’re ready to go.

“The iPad mini is extremely easy to use,” Andy Sears, head coach of the Central Mass Lightning, said. “If you get the right setup with the right tripod, you’re only moving the camera three inches each way as they go up the court. It’s really simple to do and I’ve never had any issues having my games filmed.”

Given the ease of use, you don’t need a professional behind the camera – a parent or sibling will do the job just fine. Parents want video of their kids for personal use and recruiting, so getting their participation and high-quality work isn’t an issue.

“They’re incentivized because they want the highlights,” Dashiell said. “If we send the film out to coaches, they’ll love the kid and want to meet the kid. The reason the parents do it so well because it’s their job to showcase these kids. It’s a commitment to their own children because they understand why we’re doing it.”

Try and get your filmer near center court and as high as you can, similar to a setup for high school games. Spacing can be tight in some gyms, and while filming from a corner isn’t ideal, it’s still useful. Position your filmer in the corner on your offensive side (they’ll have to switch ends at halftime.

Now you know why Hudl is important and how easy it is to get going. Here’s how to get your club started.