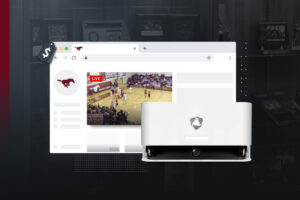 Like many schools who recently got started with monetizing their livestreams, for Mount Vernon (Iowa), it all started with COVID-19. Athletic director Matt Thede was looking to make up for lost gate revenue and keep their fans engaged.

Thede was already using a Hudl Focus camera to film events in Mount Vernon’s gym. And since Focus has livestreaming capabilities, he knew it’d be a simple process to start monetizing their livestream.

Thede started looking for broadcast partners. From an internet search, he narrowed it down to OBS. It was free and had good reviews—Thede figured it couldn’t get better than that.

“We pitched it as ‘Gary’s Foods (or any other paying sponsor) is paying for this broadcast so be sure to stop by and support them too. They’re paying for your entry.’ This allowed us to provide even more value to sponsors than what we were already doing in our printed programs,” said Thede.

As far as finding sponsors, Thede didn’t do it all on his own. He formed a team of people and they made a list of local businesses to approach. They also came up with tiers of support for sponsors to choose from.

“We had different levels, there were in-game sponsorships and entire season sponsors,” explained Thede. “You could have your logo on screen all game or get a spotlight as an ace sponsor for volleyball or a three pointer sponsor for basketball.”

Thede also wasn’t content to simply have the broadcast available. He wanted to add the Mount Vernon branding, to make it something everyone could be proud to support. “Mustang Vision” was created and circulated as the broadcast to watch the school’s events on. It didn’t hurt that Focus gave viewers the best seat in the house.

Another major step to getting fans to tune in? Finding a sports commentator who could really get the people going.

“Our announcers stay pretty neutral, so even the opposing fans love our commentary,” Thede said. “We get emails from people in opposing towns about it. The trick is to find someone who’s super passionate about it and professional with it.”

Even though Mustang Vision has only been going for one far from “normal” school year, Thede has every intention of keeping it running.

“We plan on doing a broadcast for the foreseeable future,” said Thede. “Our fans really appreciate it. I think there’s still people who will stay back and want to watch [the broadcast]. Also, we really don’t know who was watching from home that never came out in the first place. I don’t think this year will provide all the answers, but as soon as we get a “normal year,” we’ll know a lot more.”

But that doesn’t mean they aren’t making any changes. For this next school year, Mount Vernon’s marketing class will start shooting commercials for local businesses who want to sponsor their broadcast. They plan to charge $500 for each commercial as a new way to generate revenue for their booster club and athletic department fund.

If you’re still getting started with monetizing, take Thede’s advice on teamwork.

“Find people who are passionate about sports. Nobody is ever short on ideas, but you have to empower them to do it. If [broadcasting] was just on me, it wouldn’t be getting done.”

Add Hudl Focus to your team for an easy way to get started with monetization.