By Dr. Cory Dobbs, President, The Academy for Sport Leadership.

On an unusually warm morning, sometime in October, the head coach of a successful basketball program looked at me and said, “He just doesn’t get it. He can’t help us. He simply does not know how to lead this team!” As an invited guest I listened and observed. And listened. And observed some more.

This was a return visit by me to evaluate the team’s culture. A couple of months earlier I’d spent several weeks during the off-season working with the staff and players to build a leader in every locker culture. My visit was part research—to evaluate how “sticky” is our Teamwork Intelligence program (created by The Academy for Sport Leadership), and part coaching—to come back and revisit some of the key practices of the Teamwork Intelligence program with the coaches and players.

The player that caused the coach’s rant was a returning point guard of whom much was expected. In the past, all the point guards the coach deployed were boisterous, passionate, and outwardly emotional. This point guard, however, was unusually quiet on the floor, off the floor, and in the classroom. Conversations with him are always lop‐sided, others doing the talking. The head coach was frustrated that after two years in the program the player had yet to come out of his “shell.”

The introvert at a crowded party is likely to find a comfortable seat from which to observe the activity of others. Introverts are inclined to “be quiet” and are drained by such social encounters, while the “party animal” extrovert is energized by such activity and seeks out people to charge their batteries.

Several years ago, Susan Cain, a Harvard Business School professor, delivered one of the most well‐received Ted Talks of all time. Today the YouTube video counts more than 18 million views of her talk on introversion. Cain wrote, the 2012 book “Quiet: The Power of Introverts in a World That Can’t Stop Talking,” which has sold two million copies worldwide. With the Ted Talk and book, Susan Cain has single‐handedly triggered a deeper awareness of and appreciation for the many facets of introversion. She’s introduced a myth-shattering perspective that has transformed the way we view introversion and introverts.

Far more than we are consciously aware of, we live in a society dominated by extroverts. Cain’s research points out that the American culture glorifies extroversion. Sports stars and movie stars are highly paid and followed, and social media thrives on people exposing their innermost thoughts and feelings. Extroverts are highly visible in most settings and situations. Bold personalities are rewarded.

Cain writes, “We’re told that to be great is to be bold, to be happy is to be sociable. We see ourselves as a nation of extroverts—which means that we’ve lost sight of who we really are.” In fact, she notes, one‐third to one‐half of Americans are introverts. So if you’re not one yourself, she often advises audiences, “You’re probably raising or managing or married to one.”

The quiet and reserved point guard that so frustrated the coach, it turns out, was an introvert. A stone cold introvert. After practice the head coach set the stage. Before examining the practice session we sipped iced‐tea—a kind of cooling off period.

Our conversation was soon set in motion. The head coach opened our post‐practice conversation with a “See. I told you so,” reinforcing a tight grip on his perspective. My observation of the practice session that day was, however, quite different.

During the practice I counted 18 personal touches (such as grasping a teammate’s elbow in order to pull the teammate in to hear him speak)—micro acts of leadership—by the point guard. The coach looked at me in a curious way when I stated this fact. So I explained. Each touch by the point guard was a leadership act. A player threw an errant pass that was taken by the opposing squad down the floor for a quick score. Knowing and sensing his teammate’s anger the quiet leader simply walked over and literally lifted his teammate’s head—softly but authoritatively. The teammate immediately shifted back into a positive mode. Such behavior happened at the most appropriate times. During a stop in action the quiet leader walked over to a teammate and softly spoke words of instruction—never calling attention to himself. Rather, in a calm and nonchalant manner the quiet
point guard curiously found all kinds of quiet moments in which to take action and provide leadership.

The seemingly reticent team leader was completely in tune with his teammates. The head coach, however, not looking at these micro‐actions as leadership moments, simply could not see what was right in front of him. The team manager loaded up the video of the practice, allowing me to show display evidence of the “non‐leader” leading.

Most people are comfortable thinking of leaders as being outgoing, visible, and charismatic. Such a perspective is overly narrow.

Scientists now know that, extroverts have no special advantage in leadership. Yes, they tend to be more visible, and assertive, but those are situational advantages.

Introverts tend to process more information and do so accurately as they are often able to mitigate the influence of emotion. Further, introverts seldom need the emotional stimuli that an extrovert requires. They do best in quiet environments where they can interact one-on‐one, or in small groups. Knowing who the team’s introverts and extroverts are can go a long way in building deep and durable interpersonal relationships.

The specter of the introverted team leader touches on a fundamental distinction between action and reflection. When we think of team leaders, we usually envision someone like Tom Brady, LeBron James, Carli Lloyd or Julie Foudy. The image of a team leader is one of action; rare is it when reflection is considered a co‐equal quality. But action without reflection is a suboptimal way of building a cohesive team.

These two aspects of human dynamics, action and reflection, establish the essential elements of leadership. Everything a leader does involves some degree of action on the ground and reflection distilled in making sense of events, incidents, and relationships. As one expert said, “Action without reflection is thoughtless; reflection without action is passive.”

Accordingly, it is no longer impossible to have introverts participate in team leadership. A reorientation to use action (read extrovert) and reflection (read introvert) in creative ways is to ensure a healthy climate conducive to building a high‐performance team culture. To put it simply, if we recognize ways to include the introvert along with the extrovert in team leadership, we can create a leader in every locker.

The Academy for Sport Leadership’s Coaching for Leadership Approach: Our approach to team building is rooted in the belief that leadership is a powerful force for shaping a team’s culture, influencing the growth and development of student-athletes. We find that and those coaches that practice deep leadership, and a deep commitment to Coaching for Leadership, stand above and apart from others in the profession. 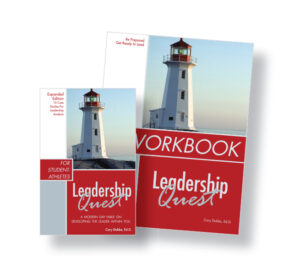 Click here for more information on the: Leadership Quest Pack